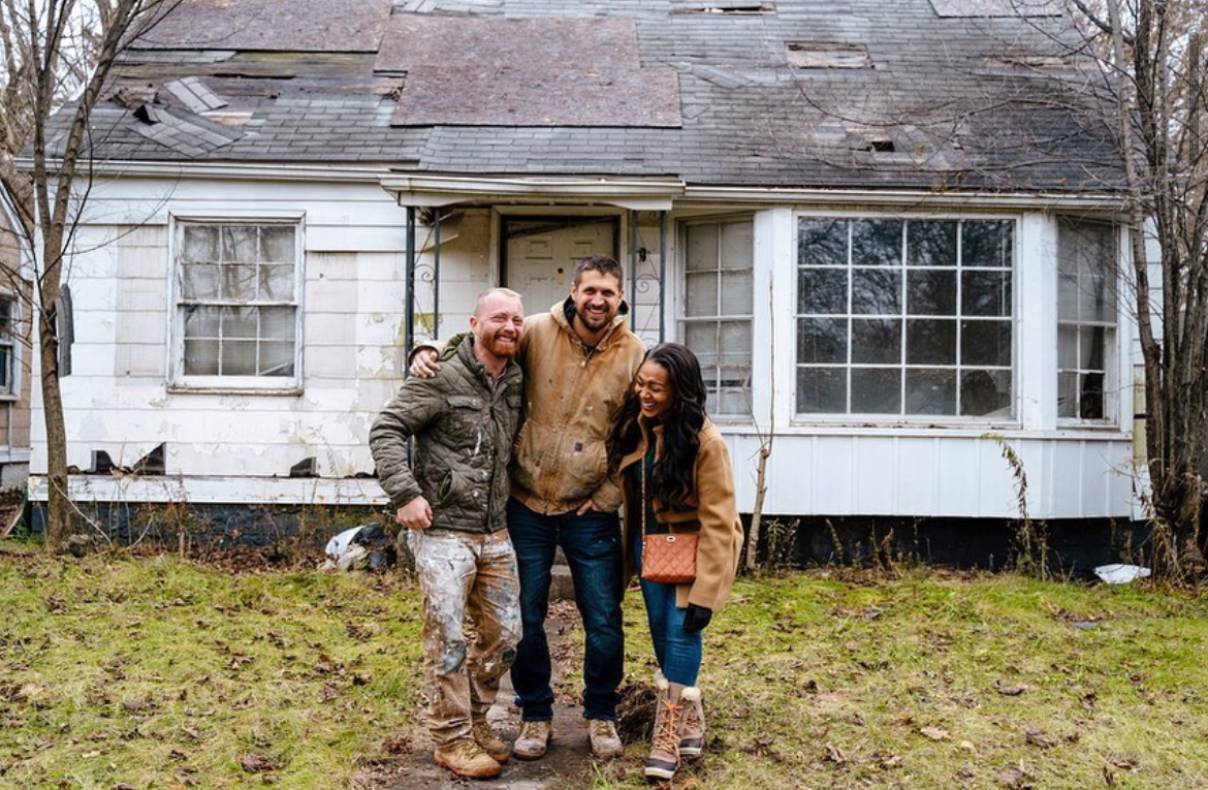 DETROIT – The HGTV show “Bargain Block” is coming back to Detroit for its third season next fall. The show stars a couple who renovate and sell run-down homes across Detroit and is heading to Fitzgerald on the northwest side. It’s a neighborhood where residents have been let down before by outside developers looking to reimagine their neighborhood.

The show’s stars, Keith Bynum and Evan Thomas, have been flipping homes since moving to Detroit in 2017. They’re known for taking modestly sized and priced homes, carrying out some creative and colorful upgrades and selling the renovated home for around $100,000.

When the show started filming in 2020, the couple was doing all the renovation work themselves before handing the house over to their real estate agent, Shea Hicks-Whitfield, who is also prominently featured on the show.

Money was tight enough that Bynum and Thomas would live in the homes while they were renovating, moving almost every month.

“There was a big learning curve at first,” Bynum said. “We were under a lot of pressure and deadlines set by filming. But in the process we learned how to scale a business.”

They’ve finally bought a house for themselves, and their business, Nine Design + Homes, is now a team of eight that includes an architect.

In advance of the third season, the couple bought nine homes from the Detroit Land Bank in Detroit’s Fitzgerald neighborhood. The average price of each house purchased by Brynum and Thomas was around $6,500.

Fitzgerald is largely bound by Livernois Avenue, McNichols Road and the Lodge freeway and filled with colonials, ranches and cottages that are typically smaller than those in the adjacent Bagley neighborhood. They’re also generally in worse shape; the neighborhood was hard hit by disinvestment and the post-2008 foreclosure crisis.

The couple prefer to concentrate their work in close proximity in neighborhoods or blocks — hence the name “Bargain Block” — so it can have a cumulative effect on the neighborhood and their bottom line. An initial sale sets a new baseline comparison for appraisers. Future sales are then more likely to be higher.

The couple worked in neighborhoods like Pembroke north of Fitzgerald for the first two seasons of the show.

“We’re just kind of moving down Livernois,” Bynum said. “We wanted to start working here a while ago because prices were rock bottom, but there was no resale value. That’s changed recently.”

The Bargain Block team are far from the first developers to see potential in Fitzgerald.

Late in his first term, Mayor Mike Duggan targeted the neighborhood for an aggressive redevelopment strategy. The land bank owned hundreds vacant homes and lots in Fitzgerald, and in 2017 a single development team consisting of Century Partners and The Platform was given the option to purchase 115 homes. The goal was to redevelop all the homes and beautify an additional 200 lots — in just two years.

Redevelopment ended up well short of those goals. After numerous delays and calls from residents that they should have the option to purchase homes, the project was scrapped in 2021. Century Partners completed only 13 renovations. The rest of the properties went back into the Land Bank’s inventory.

The main lesson from the Fitzgerald Revitalization Project, as it was called, was that a multipronged approach to neighborhood development is what the city needs, said Kim Tandy, the city’s District 2 manager.

“One developer probably shouldn’t have gotten all that residential property at one time,” Tandy said. “We should be breaking them up into smaller packages so that not just big developers, but also Detroiters and local developers can be a part of this.”

The city is encouraging smaller scale projects in the neighborhood to rehab or renovate properties left over from the Fitzgerald Revitalization Project. Residents were first given an opportunity to buy some of the remaining homes at an 80% discount, according to land bank spokesperson Alyssa Strickland-Knight. Nine land bank homes have been bought this way since 2021. Five more residents bought homes through public sales and also received the discount.

Caitlin Murphy, director of strategic partnerships with the Live6 Alliance, which supports economic development in Fitzgerald and nearby neighborhoods, said residents are mostly pleased to see investment in their neighborhood when they were given an option to purchase homes.

“They just want to be communicated with about the plans,” Murphy said.

Murphy says it is hard for residents to compete with developers, who are often the only ones equipped to fix up the blighted homes that make up much of the land bank’s inventory.

“It takes a lot of work, energy, time and resources to rehab a land bank home,” Murphy said. “It’s never gonna happen unless you’re equipped with a full team of licensed, experienced contractors and have access to financing.”

Gaston Nash is a Fitzgerald resident and president of the College Core Block Club. He bought three homes from the land bank and is currently rehabbing them all. He said it took nearly three years of regular meetings and negotiations with the city before residents were able to get first of the land bank properties.

“People were pretty much okay with how everything ended up,” Nash said. “We came to an agreement that was acceptable and mostly ended up working out.”

But Nash, who likens working with the city to an “abusive” relationship, said he and his block club haven’t met with the Nine Design + Homes team. He said the city also promised to get residents a list of homes the company might purchase in case residents wanted those homes, but the city never did.

“We only found out after Bargain Block had already bought the homes,” Nash said. “It’s one of those kinds of things that leave a sour taste in your mouth.”

The “Bargain Block” team does not have as many challenges as residents do getting financing or realizing the projects, but its work is still more a labor of love than a sure thing financially. Margins are thin when flipping smaller homes — the work is expensive but the sales prices are not high. And most financial institutions don’t offer loans needed for the rehab work.

“You can’t get a mortgage for these types of homes,” said Thomas. “Fix and flip loans don’t exist when the cost of renovation exceeds the value of the home.”

But Nine Design + Homes has been able to access other kinds of loans to fund its projects. Most recently, Community Financial Credit Union based in Plymouth is providing it with a line of credit to pay for renovations.

Bynum and Thomas said they expect to sell the renovated homes for between $100,000 and $120,000. But the last step in the process is often challenging, too. Because appraisals in Detroit often lag behind what buyers are willing to pay, it can also be hard for their buyers to get a mortgage for the full cost of the home. Buyers then have to make up the difference in a cash down payment or Bynum and Thomas have to reduce the price.

“The appraisal gap is unfair,” Bynum said. “It’s racist and it shouldn’t happen.”

Prospective buyers of the homes featured on this season of Bargain Block might be able to work with Community Financial, who said it’s also going to fast-tracking even small loans through a program that has no minimum credit score with low- or no-down payments.

The Bargain Block team has already started working on the homes that will be included in the third season and expects shooting to continue throughout the summer.

Maybe by then a much larger chunk of Fitzgerald will be revitalized, in no small part due to the contributions of residents. Nash said all the resident-bought homes have been cleaned up and the vast majority have begun work.

“I think it speaks well about what we’ve been able to do to fix up our own community,” Nash said.

This article has been updated to include both Century Partners and The Platform as the development team behind the Fitzgerald Revitalization Project.