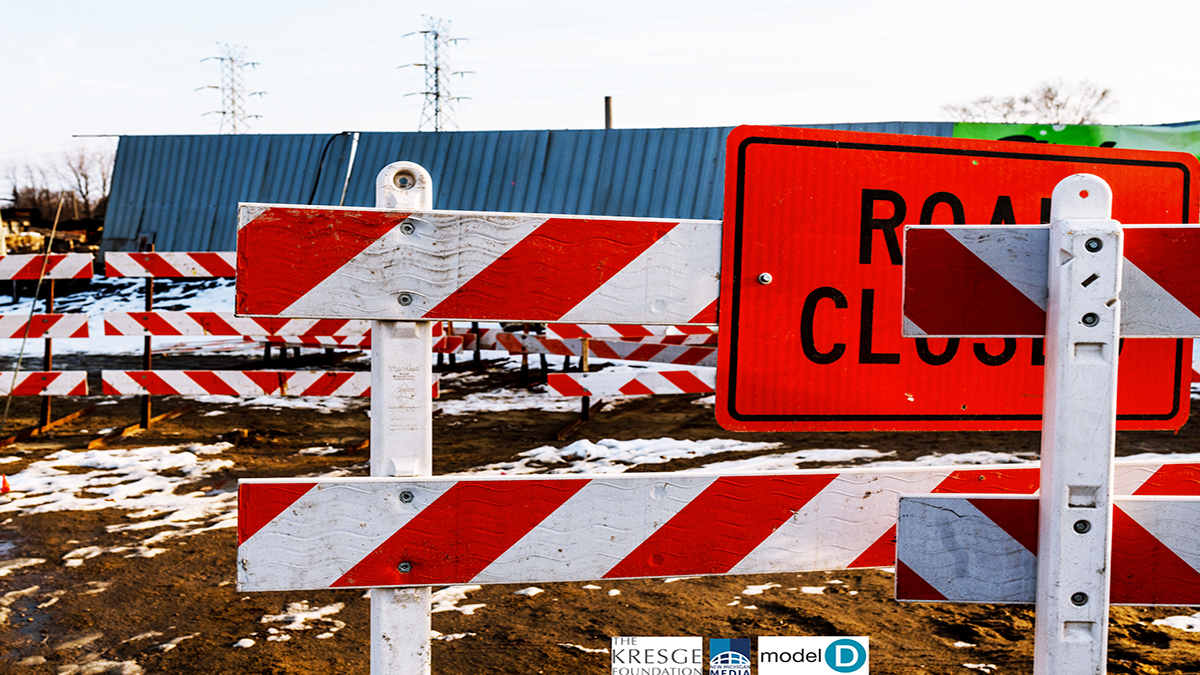 Authorities were baffled by a geological incident that caused the ground itself to buckle in Detroit’s Delray neighborhood last fall.

On the night of Sept. 11, 2021, the intersection of Dearborn and West Fort streets experienced a shifting of the ground that left a roughly eight-foot-high mound of earth. The upheaval disrupted gas and water service and destroyed the Stash Detroit medical marijuana dispensary.

Lara Rose, a Delray resident who lives near the site, remembers the chaotic fallout of the event.

“When I first heard about it, they were saying it was an explosion,” she says. “It was very crazy. All of my neighbors were talking about it.”

After the incident, the water in the downstairs apartment of Rose’s two-family flat turned brown and a faint gas smell lingered in the area for several months. The event has left Rose wondering about upcoming construction projects like the new Gordie Howe International Bridge.

“They’re going to be doing new construction and what have you. It’s definitely a concern,” she says. “If it happened once, who’s to say it’s not going to happen again?”

Attendants at the scene included city emergency responders, Homeland Security personnel, and workers from Detroit Water and Sewerage, Great Lakes Water Authority, DTE Energy, and several telecom companies. Oladayo Akinyem, deputy director of Detroit’s Department of Public Works, coordinated the emergency response effort and investigation. While responders at the scene, however, community members were wrestling with questions of their own.

“There were a bunch of different entities, but we were never really clear what was happening,” says Angela Reyes, Director of the Detroit Hispanic Development Corporation. “There was very little information [given] to residents.”

According to Hakim Berry, Chief Operating Officer for the City of Detroit, Homeland Security and Detroit’s Department of Neighborhoods went door-to-door to notify residents adjacent to the incident site about the upheaval. While emergency protocols were followed, says Berry, an evacuation was not deemed necessary.

In addition to the Sept. 11 incident, the area has also experienced two recent dock collapses. In 2019, a portion of shoreline gave way at the Revere Dock near historic Fort Wayne. And In November of last year, another section of sea wall at the Revere Dock collapsed. In both cases, the docks were owned by Revere Dock, LLC and leased to Detroit Bulk Storage. Those incidents are believed to have been caused by storing heavy piles of material too close to the shoreline.

The city responded with investigations, tickets, and cease-and-desist orders, and Detroit’s Inspector General has looked into permanently banning Detroit Bulk Storage from operating near the riverfront.

“In two of the incidents with the dock collapses, the owner was in violation,” says Berry. “And so we have appropriately addressed them along with the state regulatory agencies.”

After more than a month, the city released a geotechnical report on Dec. 15. Analysts with the Somat Engineering firm determined there had been significant ground movement on Sept. 11 in “two major heave areas” in the vicinity of Dearborn and Fort streets. A summary stated it was likely caused by the “presence of a nearby stockpile of metallic scrap and soft ground conditions.”

The stockpile in question was located at Fort Iron & Metal at 9607 Dearborn St. Heavy rainfall in the area had been 150% higher than usual in the 100 days prior to the event. The report’s authors believe that “the weight of the stockpiled mill scale material exceeded the shear strength capacity of the underlying clay soils to cause the heaved areas and disruption to the existing structures adjacent to the Fort Iron site.”

In light of this and the two recent dock collapses, SDCBC’s project director Simon Sagovac thinks the city should be paying more attention to the permitting and enforcement of area businesses.

“This irresponsibly causes extreme vulnerability and danger to an already highly vulnerable population as well as to the Great Lakes,” she says. “We did get the Waterbody Protection Ordinance passed in the wake of the first collapse, but it clearly didn’t prevent the second. We have to ask why, how is it falling short?”

In the aftermath of the Sept. 11 incident, Sagavac believes there needs to be a citywide study of underground conditions to prevent future events. Berry says the city has been working to address the situation.

“It absolutely is a concern,” Berry says. “We are aware that this has happened and we’ve already begun the process of rewriting the ordinance.”

While businesses are required to have geotechnical surveys in order to open, city officials have considered adding weight regulations and holding periodic check-ups for storage. But Reyes believes there needs to be more consideration about what the upheaval and dock collapses might mean for the neighborhood.

“If the soil is not going to be able to sustain the weight of these types of industries in that area, maybe they need to be relooking at what the plans are long-term for that area, particularly with climate change,” she says.

Berry is confident that engineers working on local projects can take ground conditions into consideration and says city officials are aware of the necessity of adapting to the challenges posed by climate change.

“We do need to upgrade our infrastructure,” he says. “The earth has changed, . . . but I think we’re better equipped to manage it. [We need to] have faith in the processes.”

Resilient Neighborhoods is a reporting and engagement series that examines how Detroit residents and community development organizations are working together to strengthen local neighborhoods. This story was originally produced and published by Model D Media and is reprinted in New Michigan Media newspapers through a partnership supported by the Kresge Foundation.