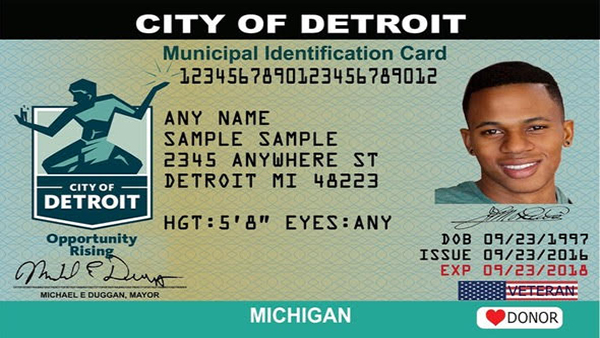 “Detroit ID was launched in 2016 to provide universal access to photo identification for all Detroiters with a single ID program. With this redesign, we are segmenting populations and putting people’s safety at risk, while eroding public trust in the process. This affects the lives of my residents, our neighbors, our families, our friends, and our colleagues. I am glad the Administration has suspended the program, but we still have more to address to truly be a Welcoming City,” says Council Member Gabriela Santiago-Romero, who sponsors and co-chairs City Council’s Detroit Immigration Task Force (ITF).

According to Christine Sauvé, ITF Co-Chair and Community Engagement + Communications Coordinator at Michigan Immigrant Rights Center, “The Detroit Immigration Task Force worked long and hard with the City in 2016 to establish a Detroit ID we could all be proud of,” which included a point system that assigned values to various documents to verify one’s residency and identify.

“In its conception and initial implementation, the Detroit ID program  was a shining example of governmental officials and community members coming together to problem solve and create an initiative that would assist a cross-section of residents in the city. The collaboration ensured that no community felt othered, separated, or targeted,” said Congressmember Rashida Tlaib.

However, rather than continuing to use the point system to verify identity, the re-design utilized a new vendor, MoCaFi, and additional software provided by Socure. Consequently, this introduced a new risk of exposing applicants’ personal information to third parties without their consent. Further, these changes put immigrant communities at risk for targeted enforcement by  U.S. Immigration Customs and Enforcement (ICE).

“It is unfortunate that the City recently decided to allow a vendor with a checkered past and ties to ICE to administer this critical program. The issues with allowing ICE to access local governmental information are well-documented and put our immigrant neighbors at risk,” continued Congressmember Tlaib.

State Senator Stephanie Chang, who has served portions of Detroit in the state legislature since 2015, added “The Detroit ID program has been vital in assisting residents to obtain the ID necessary to participate in our local economy, obtain access to city services more easily, and assuage safety concerns for residents and law enforcement. These changes discourage those who need the protection of an ID most from obtaining it.”

“The damage that this mishandling of the data collected from what was designed to be a safety-net for our underserved and most vulnerable community members is reprehensible,” said Sophia Chue, ITF member and Executive Director of Caribbean Community Service Center. “I applaud the City of Detroit Immigration Task Force for being diligent and transparent while protecting our most vulnerable residents. Let those who know better, do better.”

City officials said 833 applicants applied for the Detroit ID after the relaunch.

“What we have seen unfold in recent months is heartbreaking. City officials did not listen to our concerns about the new program’s potential harm to residents. Now members of our community are living in fear of being separated from their families. Moving forward, we need the administration to contact applicants whose data may have been shared, and we need to see real collaboration with the community to make this program work for all Detroiters. We want the Detroit ID program as it was before – safe, secure, and trusted by residents,” said Sauvé.

Corporation Counsel Conrad Mallett Jr. announced Friday, July 15 that the program is now suspended as the city issues a new request for proposals for the program. Yet work still remains to protect the 883 applicants whose personal information is at risk, and to repair trust with affected communities.

For immigrant residents who applied for a Detroit ID between May 1-July 15, their information may have been shared with third parties, including entities that share data with ICE. There are steps people can take to protect themselves and their family. We encourage residents who may have been affected to visit bit.ly/MIRC-resources and consult the “Preparing Your Family for Immigration Enforcement” guides posted in multiple languages.

“It is my hope that City officials work with community members and organizations to implement best practices within the Detroit ID program that do not put our communities and neighbors at-risk,” said Congressmember Tlaib.

“As an elected leader, I’m accountable to my constituents and the broader Detroit community. So whether folks are calling me about the need for affordable housing or programs and services for folks with marginalized identities, I will stand with them and take action. We must acknowledge people’s feelings of fear and frustration caused by the re-design of the Detroit ID program, and act accordingly. In working with the affected communities this program was intended to support, our end game is a return to a safe, secure, unified ID program that will make us proud of how our City advances access, removes barriers, and protects our residents. We must rebuild the trust we as a City have broken, and I’m ready and willing to do that with whoever will join me,” said Council Member Santiago-Romero.

We, the undersigned, need the City to:

Additionally, in light of the potential harm that has occurred, we urge the City to take immediate action: