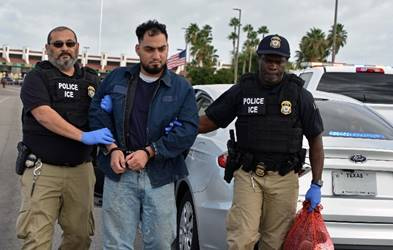 Osmar Mendez Martinez, a 34-year-old unlawfully present Mexican national, was transported by ICE officers Nov. 9 from the Montgomery Processing Center (MPC) in Conroe, Texas, to the Juarez-Lincoln Bridge in Laredo, Texas. Upon arrival, he was turned over to Mexican law enforcement officials.

Mexican authorities allege that in November 2015 Mendez Martinez strangled his fiancée and decapitated and burned her body at the Tabasco State Park in southeast Mexico. After Mexican officials accused him of the homicide, Mendez Martinez fled the country and illegally entered the U.S. on Nov. 15, 2015, near Rio Grande City, Texas. Immigration officers from the U.S. Border Patrol (BP) encountered Mendez Martinez that same day and took him into custody. During questioning, he falsely claimed to BP officers that his name was Maximo Garcia-Gutierrez, and he was returned to Mexico.

On an unknown date and at an unknown location, Mendez Martinez illegally re-entered the U.S. without inspection or parole. Working with a team of Foreign Service National Investigators and Tabasco State prosecutors under the Security Alliance for Fugitive Enforcement (SAFE) program, the ICE ERO Assistant Attaché for Removal (AAR) in Mexico City determined that Mendez Martinez had likely assumed the identity of deceased Mexican citizen Maximo Garcia-Gutierrez. Authorities further believed that he had fraudulently obtained a Mexican passport and other identification bearing that same name. Upon discovering this new information, ERO Mexico City immediately passed it on to the ERO Houston Field Office and an investigation was launched to locate the fugitive in the Houston area.

On Feb. 9, 2022, ERO Houston fugitive operations officers were able to successfully locate Mendez Martinez in north Houston and took him into custody. On Nov. 1, an immigration judge (IJ) with the Justice Department’s Executive Office for Immigration Review ordered Mendez Martinez removed from the U.S. to Mexico, which was carried out by ICE officers on Nov. 9.

“This is another example of the strong partnerships that the ERO Houston Field Office has with our international partners and ICE offices abroad,” said Matt Baker, acting field office director for ERO Houston. “The ability to receive intelligence from our attaché offices around the world and investigate those leads in near real-time to locate and remove dangerous fugitives from our community is an invaluable tool that strengthens public safety and bolsters international cooperation.”

“This was another excellent opportunity for ERO to showcase the full extent of our portfolio, along with highlighting the extensive work that goes into building these collaborative relationships with our foreign law enforcement officials,” said Pedro R. Crescente III, acting ICE ERO AAR in Mexico City. “From the initial investigation to the arrest, removal proceedings and closing with a successful repatriation – we all benefit in our mission of enforcing our commitment to making our communities safer and strengthening our international partnerships.”

The SAFE Program is a fugitive enforcement and information sharing partnership that was created in 2012 to better use subject information derived from local in-country investigative resources and leads to locate, apprehend, detain, and remove individuals residing in the U.S. illegally who were subject to foreign arrest warrants. The SAFE Program operates under the respective host nation’s AAR, which constructs a SAFE task force composed of relevant foreign law enforcement agencies, immigration authorities, attorneys general, and national identification repositories – as well as other regional, national, state, and local government agencies. The managing AAR ensures that each task force member complies with SAFE policies and standards consistent with the program’s standard operating procedures. Once established, the AAR-led SAFE task force generates new leads and vets existing SAFE fugitive referrals for ERO action.