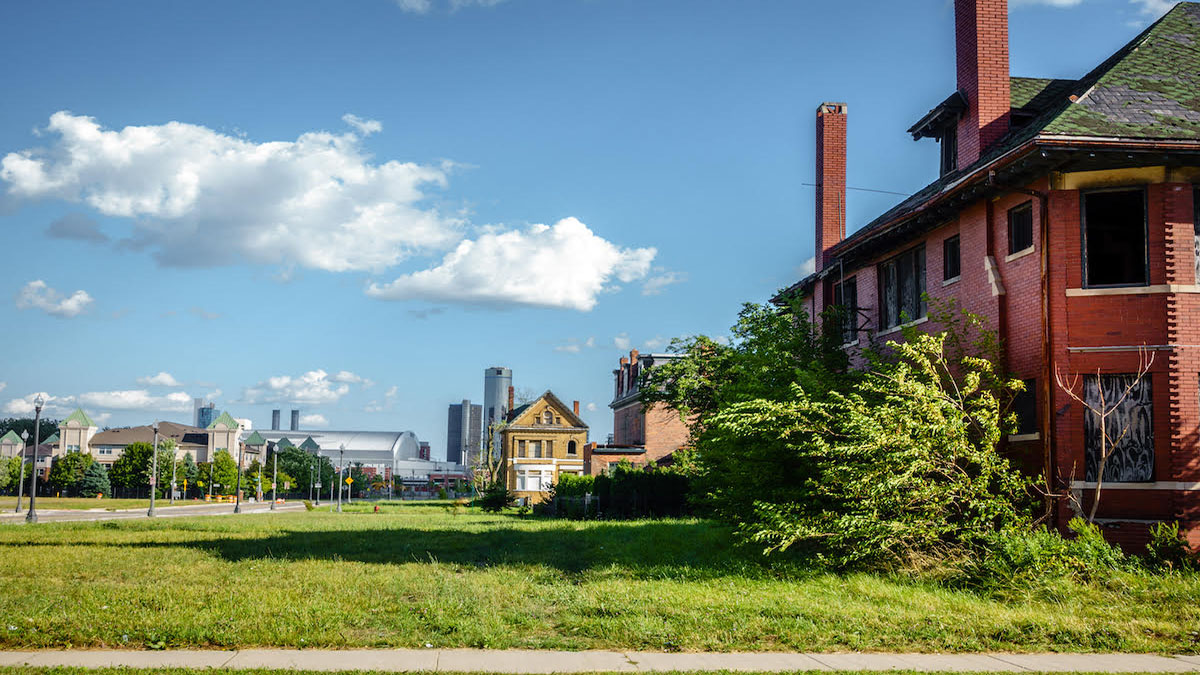 For years, Pashon Murray had been looking for land in Detroit for her composting business. The Michigan native founded Detroit Dirt in 2010. Working closely with someone from the city she finally found a spot: a 5.3-acre plot in the Core City neighborhood. In 2019, she secured a resolution from the Detroit City Council to purchase it.

The City of Detroit and the Detroit Land Bank Authority, a quasi-public entity that manages the city’s vacant residential properties, are by far the largest landowners in the city. The Land Bank alone owns nearly 20% of the city’s land, according to Detroit’s Open Data Portal. Cities and counties account for just 0.7% of land ownership in Michigan.

In August 2021 the city sold the land Murray wanted to the Pope Francis Center, which is building out a new housing campus for people experiencing homelessness.

Murray said she was blindsided by the sale and that the city didn’t give her any warning. She still wanted the property, even though she didn’t do everything she needed to secure it. Murray still has issues with how her deal went down and thinks there is a larger issue with how the city handles development deals.

“The city has to be more transparent,” Murray said. “We need more seamless pathways for small business owners to buy property in Detroit.”

Land swaps initiated by the city have had unintended consequences on neighborhoods.

In 2019, the city helped Fiat Chrysler Automobiles (now Stellantis) compile the land the company needed to build out its new factory on the east side. To do so, the city allowed several controversial speculators to trade land they owned in the area FCA wanted for other valuable parcels in different parts of the city.

For example, in exchange for an 82-acre lot that is now part of the expanded factory complex, the city gave Crown Enterprises, owned by the billionaire Moroun family, $43.5 million and 261 parcels, many in Southwest Detroit where the family is not well liked. Michael Kelly, who is being sued by the city for blight violations, got 15 properties and had more than $2 million in debt he owed to the city written off in exchange for just five properties needed by FCA.

The city also worked out a massive swap with businessman John Hantz, who already owned hundreds of parcels on the east side, which he’s been turning into a tree farm called Hantz Woodlands. He bought that land from the city during its bankruptcy proceedings in 2013 for 8.3 cents per square foot.

Two years later, Hantz had sold a little over 100 of the properties for $2.8 million.

“The City of Detroit has an enormous inventory of small, scattered properties, most of which are either vacant or economically unsalvageable. They need to be assembled into larger parcels if they are to be put back into productive use,” John Mogk, a Wayne State University law professor, wrote to Outlier.

Donna Givens Davidson, president and CEO of the Eastside Community Network, a grassroots organization that works with residents near the footprint of the Stellantis factory, has been disappointed with how deals have gone down in her neighborhood.

She said there was no communication with the neighborhood about how the swaps might affect them, and that residents have been upset that companies that have “demonstrated ill will” get to influence the makeup of her neighborhood.

“And for a project that came to the table with a design, contractor and money fully raised — and has also been a partner in helping address homelessness — was very appealing for us,” he said.

“The city should have some strategy goals and benchmarks around how much of its property it’s selling to low-income individuals, how much will go towards green infrastructure, and then solicit bidders to accomplish those goals as opposed to just having open sales,” she said.Reach AARON MONDRY at aaron@outliermedia.org or 313-403-7221.