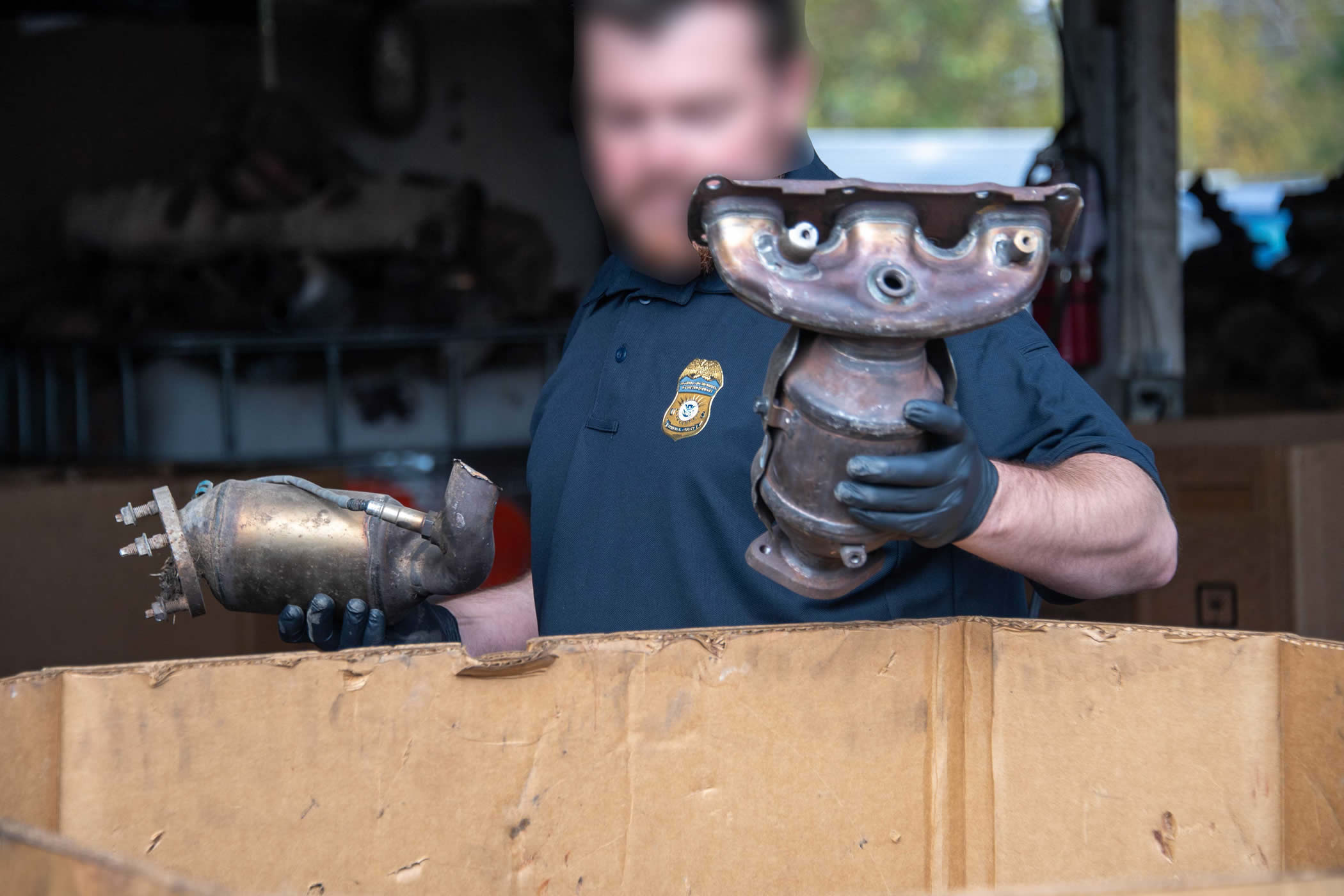 WASHINGTON — Federal, state, and local law enforcement partners from across the United States, including Homeland Security Investigations (HSI), executed a nationwide, coordinated takedown Nov. 2 of leaders and associates of a national network of thieves, dealers, and processors for their roles in conspiracies involving stolen catalytic converters sold to a metal refinery for tens of millions of dollars.

Arrests, searches, and seizures took place in California, Minnesota, New Jersey, New York, Nevada, North Carolina, Oklahoma, Virginia, and Wyoming. In total, 21 individuals in five states have been arrested and/or charged for their roles in the conspiracy.

The 21 defendants are charged in two separate indictments that were unsealed Nov. 2 in the Eastern District of California and the Northern District of Oklahoma, following extensive law enforcement arrest and search operations. In addition to the indictments, over 32 search warrants were executed, and law enforcement seized millions of dollars in assets, including homes, bank accounts, cash, and luxury vehicles.

“The success of this national takedown highlights the importance and necessity of dynamic law enforcement partnerships that we foster at DHS every single day,” said Deputy Secretary of the Department of Homeland Security John K. Tien.

“This calculated, cooperative whole-of-government approach across multiple states illustrates our commitment to protecting the homeland from those who seek to profit from sophisticated schemes. HSI will continue to focus its efforts on keeping these types of criminal elements off our streets while dismantling the groups behind these and other thefts.”

“We cannot overemphasize enough that these are not victimless crimes, and that the increased number of these crimes poses a very legitimate threat to the U.S. economy. Our HSI special agents continue to work tirelessly to disrupt these criminal organizations and bring those who seek to profit from counterfeit or stolen products to justice.”

Catalytic converters are components of an automotive vehicle’s exhaust system that reduce toxic gases and pollutants from a vehicle’s internal combustion engine into safe emissions. Catalytic converters use precious metals in their center, or “core”, and are regularly targeted for theft due to the high value of these metals, especially palladium, platinum, and rhodium.

Some of these precious metals are more valuable per ounce than gold and their value has increased in recent years. The black-market price for catalytic converters can be more than $1,000 each, depending on the type of vehicle. Additionally, catalytic converters often lack unique serial numbers, VIN information, or other distinctive identification features, making them difficult to trace to lawful owners. Thus, the theft of catalytic converters has become increasingly popular because of their value, relative ease to steal, and lack of identifying markings.